Now it was time for the headline act, The Desperados, a three piece from Cheltenham making their London debut. Blake Sanders (Guitar/Vocals), Karolina Eastwood (Drums) and Robbie Shuck (Bass.) As soon as theywere ready to start they kicked off with ‘Salt, Tequila and Lime,’ a short little number in the classic rock and roll tradition that is sure to get people up and dancing around. Their music is a fusion of good old rock and roll, and blues rock with a hefty shot of southern rock thrown in to make a very palatable cocktail of sound. Some of the songs are more blues rock, others like ‘The Desperados’ and ‘Going Down Slow’ are classic southern rockers. This may be their London debut but they are clearly experienced and confident performers and even though the attendance isn’t good, they play as if they are in front of a crowd of thousands. The set in made up from the excellent EP ‘The Desperados’ and new material for a forth coming album. The new songs slide seamlessly alongside the old. They also throw a few covers into the mix. Voodoo Chile is not the played in the classic Hendrix style but becomes something different. The bass gives the song more of a blues feel while the guitar adds a southern sound making the song sound new and interesting. Penultimate track ‘Between You and I,’ segues into a jam as the band members are introduced before morphing into a medley of ‘Superstition’ and ‘Cocaine.’ The night ends with ‘No Diggerty,’ a surprise change of pace and a master class in thrash metal... Just kidding! ‘No Diggerty,’ it’s so southern it’s practically oozing Salt, Tequila and Lime! 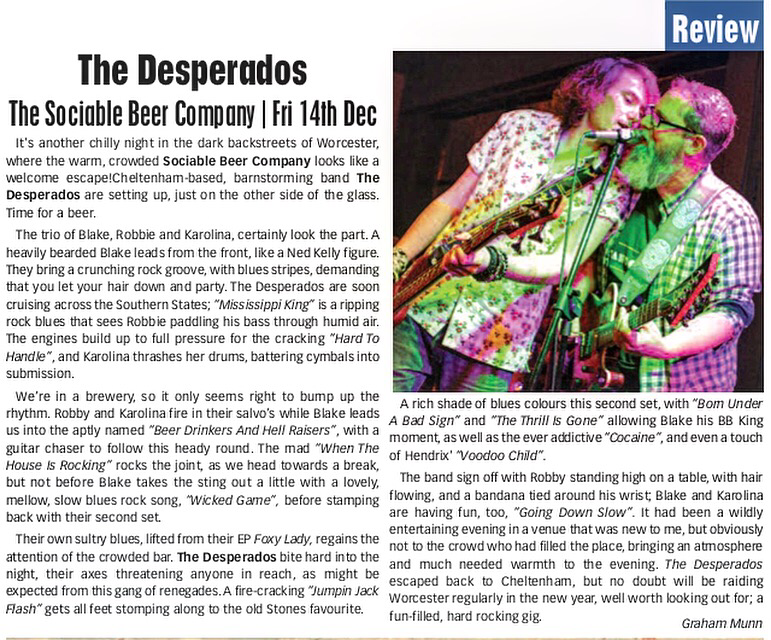 Another chilly night in the dark backstreets of Worcester, the warm, crowded Sociable Beer Company, looked inviting, and Cheltenham barnstorming band, The Desperados, were setting up, just the other side of the glass. Time for a beer.
The trio, Blake, Robbie and Karolina, certainly look the part, A heavily bearded Blake, leading from the front, like a Ned Kelly figure, they bring a crunching rock groove, with blues stripes, that demands you ‘let your hair down’ and party. They’re soon steaming across the Southern States, in ‘Mississippi King’, a ripping rock blues, sees Robbie paddling his bass in the humid air. The engines building up to full pressure for a cracking, ‘Hard To Handle’, that could just be, Karolina, as she thrashes her drums and batters the cymbals into submission.
We’re in a brewery, so it only seemed right to bump up the rhythm, with Robby and Karolina firing in their salvo’s, Blake leading the way into, ‘Beer Drinkers And Hell Raisers’, with guitar chaser to follow through on this heady round. A mad ass’d, ‘When The House Is Rocking’, rocked the joint, as we headed toward a break, but not before Blake took the sting out a little, with a lovely mellow, slow blues rock of, ‘Wicked Game’, lifting the throttle a little, before stamping back down with a second set.
Their own sultry blues, lifted from their EP, ‘Foxy Lady’, regained the attention of a crowded Sociable Beer Company, self named, ‘The Desperados’, bit hard into the night, axes threatening everyone in reach, as expected from this gang of renegades. A firecracking, ‘Jumpin Jack Flash’, had the feet stomping to the old Stones favourite.
A rich seem of blues coloured this second set, ‘Born Under A Bad Sign’, ‘The Thrill Is Gone’, giving Blake his BB King moment, the ever addictive sound of ‘Cocaine’, not to mention a touch of Hendrix, in the form of, ‘Voodoo Chile’. No guitars behind the head stuff, but Robby was making up for that by airing his bass, and striking a pose or two, the band signed off with Robby standing high on a table, hair flowing, bandana tied around his wrist, Blake and Karolina, are having fun, ‘Going Down Slow’. It had been a wildly entertaining evening, in a venue that was new to me, but obviously not to the crowd who had filled the place, bringing an ambience and badly needed warmth to the evening, The Desperados, escaped back to Cheltenham, but no doubt will be raiding Worcester regularly in the new year, well worth looking out for, a fun, filled, hard rocking gig.

Words by Adrian Ball
The Desperados are a high energy blues-rocking trio from Cheltenham and have just released their self-titled EP. With plenty of gigs behind them they have built an enviable live reputation, even being dubbed as “the UK’s ultimate party band” by Planet Rock’s Darren Redick. Praise indeed.
And with songs like Salt, Tequila and Lime, it’s no wonder. It launches onto your senses just like a fresh Margherita with fast paced, in-your-face beats, almost reaching rock-a-billy at times. This is a definite party song that doesn’t fail to put a smile on your face and a skip in your step. It would be easy to see this song making a big live impact with plenty of opportunities to dance till you drop.
The EP takes a turn with I Ain’t Scared Of Dying, which starts with a short, sharp shock before hitting heavy blues and country-rock vibes. The soulful guitar work overlays the drums with a now familiar gravelly vocal that fits in so well with the musical style.
The Desperados slows the pace and allows you to see a different side; punchy vocals with slow, rhythmic strums allow time to sit back, relax and soak it all in.
Going Down Slow is the final track and continues to highlight the talent on show. The song builds throughout and arrives at a psychedelic guitar solo before tailing off to end the most enjoyable EP.
The lyrics are delivered with fun and in a style similar to the B-52s. Long may The Desperados continue to rock and entertain us. 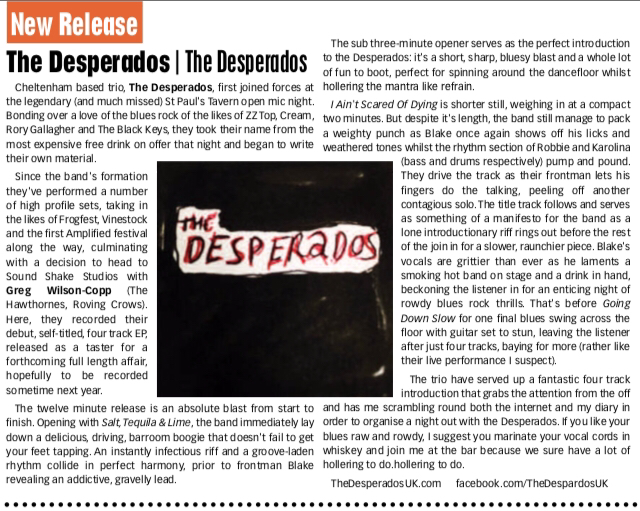